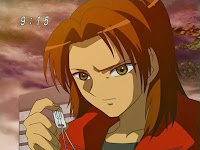 In this episode, after Kentaurosmon's dramatic rescue that brought Marcus and company out of the Digital World safely, Marcus decides to pop right back in.

For the second time in the series, Kudamon shows up out of nowhere to save the Data Squad's ass from certain doom. This sort of thing is never graceful, reeking of bad writers trying to get themselves out of a corner. That Commander Sampson's Digimon has a powerful Ultimate and now Mega form is a pretty cheap shock, and shouldn't surprise everybody after Kamemon and the PawnChessmon had been called to action. The sight of the neck weasel jumping into action and saving the day is little more than a mild, contrived amusement. Until you realize who Kudamon is, what he represents, and the significance of his actions. Then you have to ask whether he might be one of the greatest Digimon characters of all time.

This is where we learn that Kentaurosmon is one of the Royal Knights, the eighth in this army of assholes that ensure King Drasil's reign. It would be cool enough that he's willing to betray his master and help DATS out. Other knights will join him in this, and that's swell. But as the evolved form of Kudamon, he's been a presence since the very start of the series. He says that this has allowed him to understand humanity better, making it easy for him to take a stand against King Drasil's harsh edict. That simplifies what had to have been a very complicated decision for him. 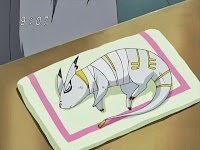 From his perch on Sampson's shoulder, it's true that Kudamon saw the relationship between human and Digimon reach its fullest potential. And yet, that relationship was losing all the way up until Marcus pulled off the Burst Mode. At the same time, he also saw the worst of humanity. The one that granted all power to a madman. The one that branded the Data Squad as traitors, wiped their memories and blew up their headquarters. The one that thought Eldradimon was more dangerous than Kurata.

It's unfair that King Drasil used Kurata and Kurata alone to demonize humanity. Kudamon had longer to observe and was able to recognize that Kurata wasn't the best example. But he also saw mankind enable him, and how little the good ones could do about it. It had to have torn him apart, and he acknowledged to Gallantmon how hard it was for him. What surely must have made the difference was that King Drasil's actions were just as cruel as Kurata's. It's the only way Kudamon could defy his master so decisively. The more you think about it, it's a moment of incredible strength, especially compared to Gallantmon. Despite acknowledging Kudamon's arguments, and without having to witness the same baggage even, he still chooses loyalty to the tyrant. 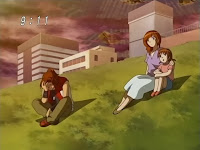 Marcus makes a similar bold decision. He's sickened by the sight of his father ordering humanity's destruction and spends so much of the episode trying to reconcile this that the battle with Gallantmon feels like background noise. He sorts through flashbacks of the last time he saw Spencer, has a long heart-to-heart with Sarah and Kristy, both deeply hurt by the news. Marcus isn't one to shy from emotions, and it appears to be an emotional decision to return to the Digital World to confront King Drasil alone.

Yet it's one of the most rational decisions Marcus could make. If the Royal Knights have any semblance of intelligence (jury's still out on that), there's no way mankind would last a full assault for long. More importantly, in all those memories of his father, Marcus can't connect the past with the present. While he hasn't pieced it together totally, he has the sense that King Drasil and Spencer are not the same entity. It's instinctive and reckless, and at the same time incredibly prescient.