In this episode, JP is vindicated, becomes the clutch hero and receives his long-awaited prize... all while continuing to make an ass of himself.

One of the go-to storylines in the show features the heroes rallying a tribe of victimized Digimon into battle against their local oppressors. The details and settings, whether feudal Japan or a milkshake distillery, change, but the episodes usually feature the same elements and are rarely significant to the plot. This one certainly isn't, serving as the stock “JP finds his spirit” episode with nothing interesting to add to the picture. At the same time, it doesn't realize how close it came to going in a really interesting direction that could have played a major role in shaping a fascinating group dynamic.

The enslaved species du jour is Kokuwamon, the tyrants are Goblimon and you can work out the rest. The Goblimon have some great receptionists in a trio of Minomon, who make for unlikely but effective supporting villains. When the digidestined show up looking for handouts, the Minomon give them a tour of the facility, putting a pretty face on the terrible working conditions. Normally this is the part where one of the kids stumbles upon the factory's dark secret, but JP misses the obvious clue right under his nose and they all leave without suspecting a thing. It isn't until they find the neighboring Kokuwamon village that they get the whole story.

Takuya promises to rally the forces and lead a worker's rebellion. JP wants no part in it and things get a little heated. This is the part where Zoe tries to undermine Takuya's leadership and chides him for trying to order the team around, right? Well, it should have been. Instead, Zoe and Tommy are totally on board with this, which is a big moment in solidifying Takuya's position as leader. That's not a good thing, as the in-fighting is one of the most enjoyable parts of these early episodes. The surprising consensus isolates JP, of course.

There are millions of reasons why JP should think helping out is a bad idea. The kids are still acclimating to their Digimon and shouldn't assume they're all-powerful. By now, the digidestined should have pieced together that they've been tapped to do big things in the Digital World. Do they really want to risk their necks in a relatively minor skirmish? Not to mention that using their special abilities to involve themselves in local affairs like this is a total violation of the Prime Directive.

Furthermore, Takuya's plan is terrible! It involves Kazemon drawing the bulk of the troops out, putting their most vulnerable teammate in incredible danger. Once that's done, Agunimon, Kumamon and the Kokuwamon are just supposed to wing it until the factory's destroyed. The plan banks on the shaky assumption that without a factory, the Goblimon will shrug it off and leave the Kokuwamon alone, as opposed to making them rebuild the place under harsher conditions. There's also no telling how strong the Goblimon force is, including what kind of nasty monster the operating manager is. It could have been Orochimon for all they knew! They were lucky that it was merely a Snimon, and Agunimon still struggled with it. 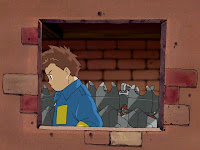 Does JP point any of this out? No, he just whines about not wanting to help, which just makes him look petulant. He's right that Takuya shouldn't boss him around autonomously, but he has to give better reasons why, and that involves proving Takuya wrong. Takuya is not as tactically strong as Tai and hasn't demonstrated the same knack for dumb luck Davis had. Until he has better footing as the leader, he needs legitimate dissent beyond Zoe's sass and JP's whining. For JP not to provide it here makes him almost as culpable as Takuya if anything bad had happened. He has the obligatory change of heart and rushes in to bail them out the hard way, but the fact that it came to that means there are serious problems in the group that nobody within it will be able to recognize.