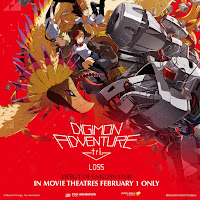 In this movie, we’re left to work out whether a major reveal is important information worthy of discussion... or the dub just going off-script again.

By now, we pretty much know what we’re going to expect going into the dubbed versions of tri. The dub will break up the silence and add additional lines, which is far more welcome in tri. than it had been for the TV series. Some of the ambiguities either lost in the translation or intended by the director become more explicit and understandable. And of course sometimes the dub is just going to mess up and say something hilariously wrong. All of those apply here, and more or less make Loss an easier ride to sit through. It doesn’t quite absolve what’s probably the weakest tri. movie of its faults, but does contort them into something more satisfying to sit through. At the same time, it also presents one fascinating change, and right now we can’t be sure which box it falls into: “less ambiguous” or “silly dub.”

So... uh... apparently that’s actually the real Gennai traipsing around with Machinedramon and being all inappropriate with the girls! Hackmon explicitly says to Daigo that King Drasil (yeah... we’ll get to that) corrupted him and the mysterious man himself says “I’m Gennai all right!” They both shrug off the question in Japanese, so two direct assertions mark a pretty significant choice for the dub, one that we don’t know is accurate or not. Having this guy actually be either a corrupted (as Hackmon says) or turned (as Gennai claims) Gennai is a big deal! It takes us away from blaming King Drasil (we’ll talk about it I swear!) for everything that’s going wrong and wondering what could coax Gennai from going from a guide to the children to someone bent on severing the human-Digimon connection. Does he really believe the digidestined used their partnerships inappropriately? Does he really think he’s doing what’s best for the Digital World despite the will of Homeostasis? Is the super creep factor natural or a product of King Drasil’s influence? Suddenly we want a backstory, something which wasn’t necessarily true when it was just Mysterious Man being a horrible troll.

Yet, despite the questions it raises, it’s better off this way. First, these questions don’t actually have to be answered. Gennai was kind of unreliable as a mentor and given how nasty Homeostasis has turned, Evil Gennai is just feasible enough to work without explanation, no matter how much we’d want one. Second, it’s one less mystery for the final movie to explain. “Where is the real Gennai?” is one of the many questions we have going into Our Future. In the dub, it’s answered. It’s off the list, and whatever we discover in the last movie becomes a development or twist rather than a simple explanation. And that’s the best part: it doesn’t actually have to be correct! Hackmon’s just going off what he’s been told and Gennai is actively trying to mess with these kids, so they could both end up being full of it and it’s technically not inconsistent.

The dub makes these kinds of improvements all over the place. The silent, static montage of the separated kids get voiced over, injecting some much-needed personality into those scenes, notably Joe, Palmon, and Patamon who didn’t get a single line originally. The annoying drawn-out train bit becomes hilarious as everybody insists it’s a mirage until it nearly kills them (and even then Gomamon and Agumon want to board the mirage). Emphasis on Matt and Meiko’s hard insistence that Meicoomon is a team member worth saving and Kari totally freaking out that Tai may have drowned foreshadow the next movie in important ways. In the climax, Patamon and Tentomon reinforce the notion that the kids themselves are responsible for higher evolutions (as opposed to the human/partner bond, which is really only a thing in Tamers), asking TK and Izzy if they know how to do it. They do... unfortunately... that part still takes too long.

In the dub, the initial rocky start between the annoyingly sweet Piyomon and a less affectionate Sora never happened, so the inversion featuring a now-motherly Sora and a now-skeptical Biyomon is even harder to pull off than the original. Instead of trying to explain it and work a now non-existent parallel, the dub abandons whatever pretext there was supposed to be and goes all in, turning Biyomon into a full-fledged tsundere. It doesn’t make a lick of sense, but the way Biyomon gradually accepts Sora is more organic. She’s a mouthy pain in the ass the whole time, only growing concerned about Sora’s “obsession” with her and why she can’t just look out for herself for once for God’s sake. It feels even less like the Biyomon we remember from before, but it makes the reconciliation story easier to buy into. After all, Sora does end up marrying a tsundere, so partnering with one isn’t a stretch.

Loose Data:
Enjoying Digimon: System Restore? Support the site by buying me a Coffee!
Posted by A. R. Pulver